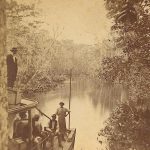 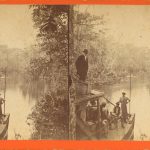 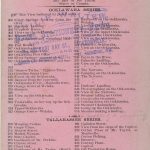 This stereoview is original from the epoch . It comes mainly from collectors in the U.S.A. and constitute wonderful testimonies of past time that tend to be unique. The scarcity, condition and the identity of the subject and if possible the identity of the photographer all play a role in determining the value of antique stereoviews. These stereoviews are important material for serious collectors, galleries and museums. The dimensions of a stereoview are Approx. 3.5″ x 7″ (sometimes 4″ x 7″).

The following is from Collectors Weekly:
The idea for stereoview photographs (also known as stereoscopic photographs, stereographs, or, simply, views) was hatched long before their invention, and even well prior to the first photographs. In the early 17th century, three separate men, Giovanni Battista della Porta, Jacopo Chimenti da Empoli, and Francois d’Aguillion, made drawings, or allusions to, what would eventually become the stereoscope or stereo viewer.

What these men envisioned essentially became a reality when the stereoscope was finally introduced in the early 19th century. Stereoscopes use two nearly-identical images, each taken a few inches to the side of the other. When viewed through two lenses set 2.5 inches apart, approximately the space between the eyes, the result is the illusion of a three-dimensional picture. In fact, stereoscopes are seen as the precursors to 3D entertainment. Much of the three-dimensional technology of today is based on the simple principles that allow the stereoscope to function.

Sir David Brewster often gets the credit for inventing stereoscopes, but he first designed the box-shaped viewer. The first stereoscope was actually introduced in 1833 by Sir Charles Wheatstone in Great Britain. At that time, photographs did not exist, so drawings were used instead. By the 1850s, photography was possible so stereoscopes began featuring this new technology.

Because the stereoscope preceded the publication of photographs in newspapers and magazines, stereo viewers were seen as forms of entertainment. People would pass around the stereoscope and see all sorts of beautiful scenes that they otherwise might never have been introduced to.

In 1859 Oliver Wendell Holmes, Sr. (his son was the Supreme Court judge) invented a handheld stereograph viewer which was later manufactured by Joseph L. Bates in Massachusetts. These antique stereographs are highly sought-after today.

Before stereoviews caught on in the United States, however, they were popular in the United Kingdom and other parts of Europe. Roger Fenton was an early stereoview photographer, as was Jules Duboscq, who made daguerreotype stereographs popular. At the same time tintype and albumen photographs were being used in stereoscopes.

In fact, the vintage photographs that were placed inside stereoscopes are even more collectible than the devices themselves. The list of themes for these pictures is limitless, and they provide a wonderful window into late-19th and early-20th-century culture.

One of the most popular genres was railroad photos. Rail transportation was developing alongside photographic innovation, so many people that never rode the rails could at least see them through a stereoscope. One of the leading railroad and Western stereoview photographers was Carleton Watkins. Other views included mines, landscapes, automobiles, and, of course, nudes. In the United States, stereoviews allowed people living on the East Coast to see the West Coast, and vice versa.

By the latter half of the 19th century, many towns had their own resident stereoview photographer, which means there were plenty of local subjects available for people with stereoscopes to go with the images of far-off lands. Several companies emerged as publishers and distributors of stereoviews on every imaginable subject, the biggest and most successful in the United States being the Keystone View Company of Meadville, Pennsylvania.

The most prolific maker of views, however, was probably the London Stereoscope Company, founded in the early 1850s. It produced hundreds of thousands of views, as well as some portraits. Its peak was the 1850s, which was the height of the stereoscope craze in the United Kingdom. The company remained strong through the next few decades before fizzling in the 1920s. It has since reopened, with its new owners making an attempt to reintroduce the popularity of stereoscopes into today’s digital world.

This lot is located in Boca Raton, Fl and its shipment will be made directly by Artelisted. Shipping insurance is the responsibility of the buyer. Ask us if you want to add insurance cost. Note that if there is loss or damage due to bad handling by the transporter, this loss will be assumed only by the buyer. Enquires are welcome, do not hesitate to contact us at your convenience, we are looking to providing you with an excellent service.