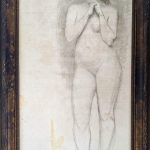 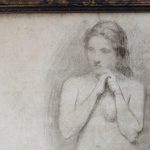 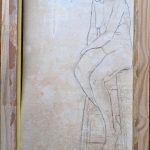 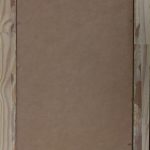 The paper dimensions are Approx: 23″ X 12″ (small variances can occur). The newer wooden frame is Approx. 2.25″ wide (includes glass protection). This paper has drawings by the same artist on the front and on the back of the paper.This very fine artwork is unsigned. There are indications from the last owner that this artwork is by an artist “Morrison” from the ASHCAN SCHOOL in New York. In our opinion it’s age and style corresponds to the indicated school period.

The following by Barbara Weinberg, Metropolitan Museum of Art: About 1900, a group of Realist artists set themselves apart from and challenged the American Impressionists and academics. The most extensively trained member of this group was Robert Henri (1865–1929), who had studied at the Pennsylvania Academy of the Fine Arts from 1886 to 1888 under Thomas Anshutz (1851–1912). Anshutz had himself studied at the Pennsylvania Academy from 1876 to 1882 with Thomas Eakins, who had defied Victorian decorum in his teaching principles and in his boldly realistic paintings. Eakins would become the lodestar to Henri and his associates. After spending the years from 1888 to 1891 working at the Académie Julian in Paris, Henri taught at the School of Design for Women in Philadelphia and gave private art classes in and around that city and, during return visits to France, in and around Paris. Beginning in 1892, Henri also became the mentor to four Philadelphia illustrators—William James Glackens (1870–1938), George Luks (1866–1933), Everett Shinn (1876–1953), and John Sloan (1871–1951)—who worked together at several local newspapers and gathered to study, share studios, and travel. Between late 1896 and 1904, they all moved to New York, where Henri himself settled in 1900.

Henri and his former-Philadelphia associates comprised the first generation of what came to be known as the Ashcan School. A second generation consisted of Henri’s New York students, of whom George Bellows (1882–1925) was the most devoted. The term Ashcan School was suggested by a drawing by Bellows captioned Disappointments of the Ash Can, which appeared in the Philadelphia Record in April 1915; was invoked by cartoonist Art Young in a disparaging critique that appeared in the New York Sun in April 1916; and was given curatorial currency by Holger Cahill and Alfred H. Barr Jr. in a 1934 exhibition at New York’s Museum of Modern Art. Although the Ashcan artists were not an organized “school” and espoused somewhat varied styles and subjects, they were all urban Realists who supported Henri’s credo—“art for life’s sake,” rather than “art for art’s sake.” They also presented their works in several important early twentieth-century New York exhibitions, including a group show at the National Arts Club in 1904; the landmark show of The Eight at Macbeth Galleries in February 1908, which included the five senior Ashcan School painters along with Ernest Lawson (1873–1939), Maurice Prendergast (1858–1924), and Arthur B. Davies (1862–1928); the Exhibition of Independent Artists in 1910; and the Armory Show—an immense display dominated by modern European art—in 1913.

In their paintings as in their illustrations, etchings, and lithographs, Henri and his fellow Ashcan artists concentrated on portraying New York’s vitality and recording its seamy side, keeping a keen eye on current events and their era’s social and political rhetoric. Stylistically, they depended upon the dark palette and gestural brushwork of Diego Velázquez, Frans Hals, Francisco de Goya, Honoré Daumier, and recent Realists such as Wilhelm Leibl, Édouard Manet, and Edgar Degas. They preferred broad, calligraphic forms, which they could render “on the run” or from memory, thereby enlisting skills that most of them had cultivated as newspaper illustrators. Although the Ashcan artists advocated immersion in modern actualities, they were neither social critics nor reformers and they did not paint radical propaganda. While they identified with the vitality of the lower classes and resolved to register the dismal aspects of urban existence, they themselves led pleasant middle-class lives, enjoying New York’s restaurants and bars, its theater and vaudeville, and its popular nearby resorts such as Coney Island. Because they avoided civil unrest, class tensions, and the grit of the streets, their works are never as direct or disturbing as those of their European counterparts or of the reformist images of American photographers such as Jacob Riis.

The Ashcan artists selectively documented an unsettling, transitional time in American culture that was marked by confidence and doubt, excitement and trepidation. Ignoring or registering only gently harsh new realities such as the problems of immigration and urban poverty, they shone a positive light on their era. Along with the American Impressionists, the Ashcan artists defined the avant-garde in the United States until the 1913 Armory Show introduced to the American public the works of true modernists Henri Matisse, Pablo Picasso, Marcel Duchamp, and others. Henri and most of his Ashcan colleagues continued to paint—even into the 1940s, in the case of Sloan and Shinn. Although their creativity waned and their pioneering character faded, they infused some of their late canvases with their earlier vigor.

This lot is located in Boca Raton, Fl. The shipping by Artelisted will be via USPS – First Class or Priority (tracking # will be provided via Stamps.com). Sometimes Artelisted can decide to coordinate shipping with a third party (between buyer and contractor). Shipping insurance is the responsibility of the buyer. Ask us if you want to add insurance cost. Note that if there is loss or damage due to bad handling by the transporter, this loss will be assumed only by the buyer. Enquires are welcome, do not hesitate to contact us at your convenience, we are looking to providing you with an excellent service.