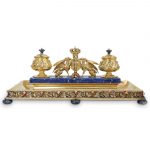 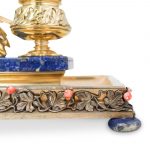 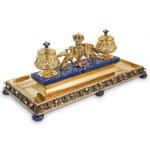 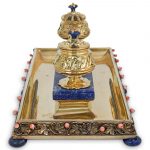 A rare French 950 Silver Royal Vermeil Inkstand featuring a rectangular form and sitting on lapis bead shaped feet. Decorated with vine tendrils with coral beads, the waisted center lapiz platform is surmounted by two urn-form inkwells. A shield with applied date ” 13 MAYO 1862″ and initials “FB” is flanked by two gilded gargoyles and topped by a Royal Spanish Crown. Initials F and B stand for Fernanda and Bourbon.
In Spain, it was customary during the months leading to the birth of a Royal child, to issue a “Real Decreto” (Royal Decree) in order to present the new prince or princess to the king. It seems likely that this inkstand was used to sign this Decree, prior to the birth of Dona Maria de la Paz.
Stamped with French “Swan” import mark.

Sidenote: Infanta MarÃ­a de la Paz of Spain (23 June 1862, in Madrid â€“ 4 December 1946, in Schloss Nymphenburg, Munich) was an infanta of Spain. A daughter of Queen Isabella II of Spain, she married her first cousin Prince Ludwig Ferdinand of Bavaria. She lived for the rest of her life in Germany, dedicating her time to her family, charity work and writing poetry. She wrote a book of memoirs: Through Four Revolutions: 1862â€“1933.
Consignor states that this inkstand was presented to Spanish Royalty as a gift, from a French maker.

CIRCA: 1862
ORIGIN: France
DIMENSIONS: H: 6″ L: 15.5″ Depth: 7.5″
CONDITION: Great condition. See lot description for details on item condition. More detailed condition requests can be obtained via email ([email protected]) or SMS 305-332-9274. Any condition statement given, as a courtesy to a client, is only an opinion and should not be treated as a statement of fact. Akiba Antiques shall have no responsibility for any error or omission.

Estate Finds Throughout France and Miami