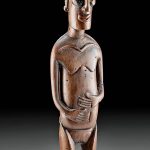 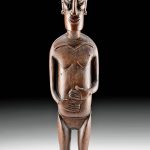 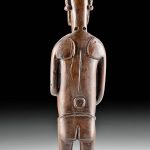 Note the artist’s careful attention to detail, as evident in her projecting collar bone, indented knee pits, and raised wrists and ankles. The petite cavities seen in the head and body indicate that this is likely an early example, made before large unblemished blocks of wood – once rare on the largely treeless island – became available through trade with Western ships.

Easter Island (Rapa Nui or Isla de Pascua) is a Chilean island located in the southeastern Pacific Ocean – at the point most southeast of the Polynesian Triangle of Oceania. Famous for its moai – colossal statues created by the Rapa Nui peoples, Easter Island became a UNESCO World Heritage Site in 1995. Scholars believe that Polynesian people settled on Easter Island between 700 and 1100 CE. They built a robust culture as the island’s impressive stone moai and other artifacts suggest.

A similar example can be found at the Metropolitan Museum of Art under accession number 1979.206.1478. In their description, they state, “The word papa in the Rapa Nui language literally denotes a flat horizontal surface of volcanic rock, but it may also indirectly refer to Papa, the female personification of the earth in many Polynesian cultures. Although indisputably female, moai papa also display masculine features, including goatee beards and, typically, bald heads. The incorporation of male elements into the figures may indicate that the female deities or ancestors they likely represented were perceived as the equals of their male counterparts.”

#166065
CONDITION
Some inactive insect holes on head, torso, upper legs, and back. Two stable fissures on back and posterior. Light abrasions to shoulder and groin. Otherwise, intact and excellent with nice patina.