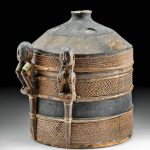 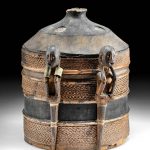 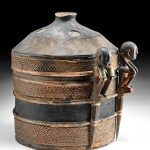 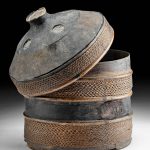 Southeast Asia, Indonesia, Borneo, Dayak, ca. 19th century. A carved-wood shaman box of cylindrical form wrapped in three registers of braided rattan fiber with a pair of hand-carved tutelary figures strapped to its exterior. Sitting upon an annular base, the box displays a circular rim and a broad mouth over a deep basin. The exterior of the box boasts two thick horizontal bands of braided rattan fiber in a hue of golden caramel over a chocolate brown base. A conical lid tops the lovely vessel, adorned with a rattan fiber-wrapped periphery and a raised circle embellishment at its center, which is surrounded by four annular recessed areas. Two carved figures decorate one side of the vessel, sitting atop integral plinths with their elbows resting on their drawn up knees and their hands on the back of their necks. Size: 8.25″ W x 9″ H (21 cm x 22.9 cm)

Intended to represent tutelary spirits and hold apotropaic powers, the fascinating figures showcase slender bodies with attenuated limbs and large, bald heads bearing inlaid, glass bead eyes, flat noses, and incised, open mouths. One of the curious figures is adorned with a pair of petite nickel brass arm bands. Boxes such as this example are known as “Lupong manang” and used by Dayak shamans to hold all the magical instruments they may need for healing, oracles, and predictions.