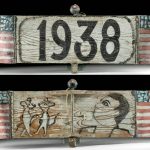 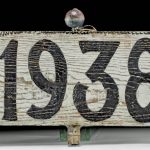 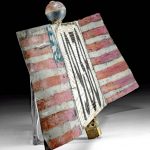 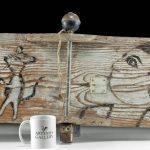 North America, United States, 1938. A fabulous piece of American folk art – a large whirligig/sign comprised of painted wood and metal – likely intended for a barn or farmhouse. On one side, the piece presents the year “1938” boldly delineated in black on white and flanked by a pair of American flags. On the opposite side are two endearing dancing mice along with the profile portrait head of a man, also flanked by two American flags. These metal flags – painted in their red, white, and blue glory – are also curved so as to add to their kinetic quality as the whirligig spins. At the center of the piece is a metal pole, about which the sign would have rotated in the wind, with a spherical finial that is also painted red, white, and blue. Size: 49″ W x 17″ H (124.5 cm x 43.2 cm)

#167028
CONDITION
There is an old repair (measuring about 2″ x 2″) in front of the man’s mouth. Some age cracks, wear to pigments, and weathering as expected. Otherwise, the decorative program is still very strong, and the form is remarkably well preserved.