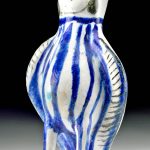 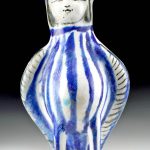 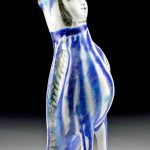 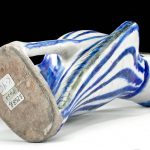 Western Asia, Persia/Iran, Seljuq Empire (Seljuk, Saljuq), ca. early 13th century CE. Wow! A fantastic ceramic vessel in the form of a harpy, glazed with the dramatic, bright colors associated with Seljuk ceramics. The neck of the vessel is the creature’s human woman face, complete with diadem atop her head and black hair. The back of her head is the open mouth of the vessel. Her bird-like body forms the rest of the vessel, which stands on two thin legs and the broad tail, atop an integral, thin rectangular base. The body features bright cobalt blue vertical stripes giving the impression of plumage. A fascinating piece of medieval Islamic artistry! Size: 5.45″ W x 12″ H (13.8 cm x 30.5 cm)

According to the Metropolitan Museum of Art’s exhibition, “Court and Cosmos: The Great Age of the Seljuqs” (April 27, 2016–July 24, 2016), “Seljuq art abounds with depictions of real, mythological, and hybrid animals on objects large and small. Animal combat was a favorite theme in Iranian art… Harpies (composite creatures having the body of a bird and the face of a human) and sphinxes (beasts with the body of a lion, face of a human, and occasionally the wings of a bird) appear frequently.”