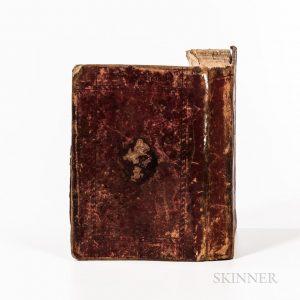 The Bulaq printing of Kitab Alf Layla wa-Layla was the first Arabic edition of Thousand and One Nights and served as the basis for almost all of its many translations and versions. The Bulaq was made between 1834 and 1835. A copy from this printing leads the upcoming Historic Manuscripts & Rare Books auction, offered by Skinner.

Among the paper items in the auction are several letters from John F. Kennedy’s Senate career and campaign for the presidency. One example from this collection is a set of typed letters from 1953 and 1957 regarding Kennedy’s concerns over fuel prices. Other epistolary examples include a letter of testimony by Peter George explaining that his 16-year-old son enlisted in the military without his consent. On the reverse is a Board of Enrollment confirmation of Mr. George’s integrity along with a brief note reading “Let this boy be discharged,” written and signed by Abraham Lincoln.

The available collection of historical manuscripts dates back to the 1930s and includes documents from George Washington, Benjamin Franklin, Thomas Jefferson, Harry Houdini, and more. Rare books in the sale include many modern first editions, a first edition copy of Gone with the Wind, a first American edition of Franz Kafka’s The Trial, and more. View any of these lots and register to bid by visiting Skinner.