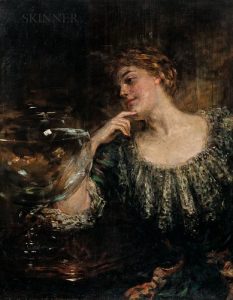 An artist who began his career by creating copies of the Old Masters, James Carroll Beckwith (1852 – 1917) went on to become one of the most celebrated American painters of the late 19th century. Beckwith was especially interested in portraits of upper-class women. A portrait of a woman, titled The Fishbowl, is available in Skinner’s upcoming Fine Paintings & Sculpture sale. The subject wears a black gown while placing her hand under her chin. She poses behind a large fishbowl.

A still life painting by Martin Johnson Heade is also among this auction’s notable lots. In this work, a vase of pink roses stands out against a black background. Throughout his later years, Heade was known for painting still lifes of flowers, mainly roses, orchids, and magnolias. Pieces from Arthur John Elsley, Edwin Dickinson, and Jane Peterson are on offer as well. Visit Bidsquare for the full listings and to place a bid.